Android and Apple Rule The US Smartphone Market

According to the latest monthly figures released by comScore*, Android and Apple continue to dominate the US smartphone market and have now increased their combined share of sales to almost seventy percent.

Android Increases Its Dominance of US Market

Android based devices, including the HTC Sensation and Samsung Galaxy S2, enjoy the highest sales figures in America commanding almost forty two percent of the market. The Google backed operating system has solidified its position as the leading smartphone platform in the country by increasing its share by 5.4 % since April.

Apple’s share of the market increased slightly, up one per cent, in the last three months with the iPhone now capturing twenty seven per cent of US smartphone users. The iOS based devices whilst struggling to make inroads into the dominance of Android have continued to attract customers away from alternatives like Blackberry and Nokia. 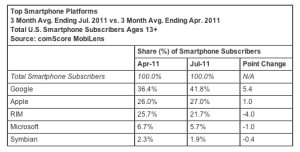 The share of the market occupied by alternatives to Android and Apple has continued to shrink over the last quarter. RIM’s Blackberry, previously a dominant force in the smartphone market, suffered the greatest loss due to the continued popularity of Apple and Android with its stake of the market decreasing by four per cent since April 2011. The 21.7 per cent portion that Blackberry holds is healthy in comparison to the 5.7 per cent share held by Microsoft and the 1.9 per cent stake that Symbian clings to.

US consumers who are adopting Android and Apple in increasing numbers spend the majority of their time on smartphones sending text messages, with seventy per cent communicating by text rather than making calls.

Forty one per cent of US smartphone users browse and download applications on their device. Previous research has indicated that smartphones are becoming an increasingly popular method for accessing the internet. eMarketer reported, in early August, that two in every five mobile owners now uses their device to access and browse the web.

Are you one of those consumers who has made the change to Android or iPhone? If you are still using Blackberry, Symbian or Microsoft, have you considered changing your smartphone to an iPhone 4 or the latest Android handset? Undoubtedly there will be many US consumers updating their mobile phones over the coming months and choosing their first smartphones. All indications suggest that the majority of those consumers will be deciding between an Apple handset or an Android based device.